WWII according to Fascist Propaganda in Achille Beltrame’s Drawings 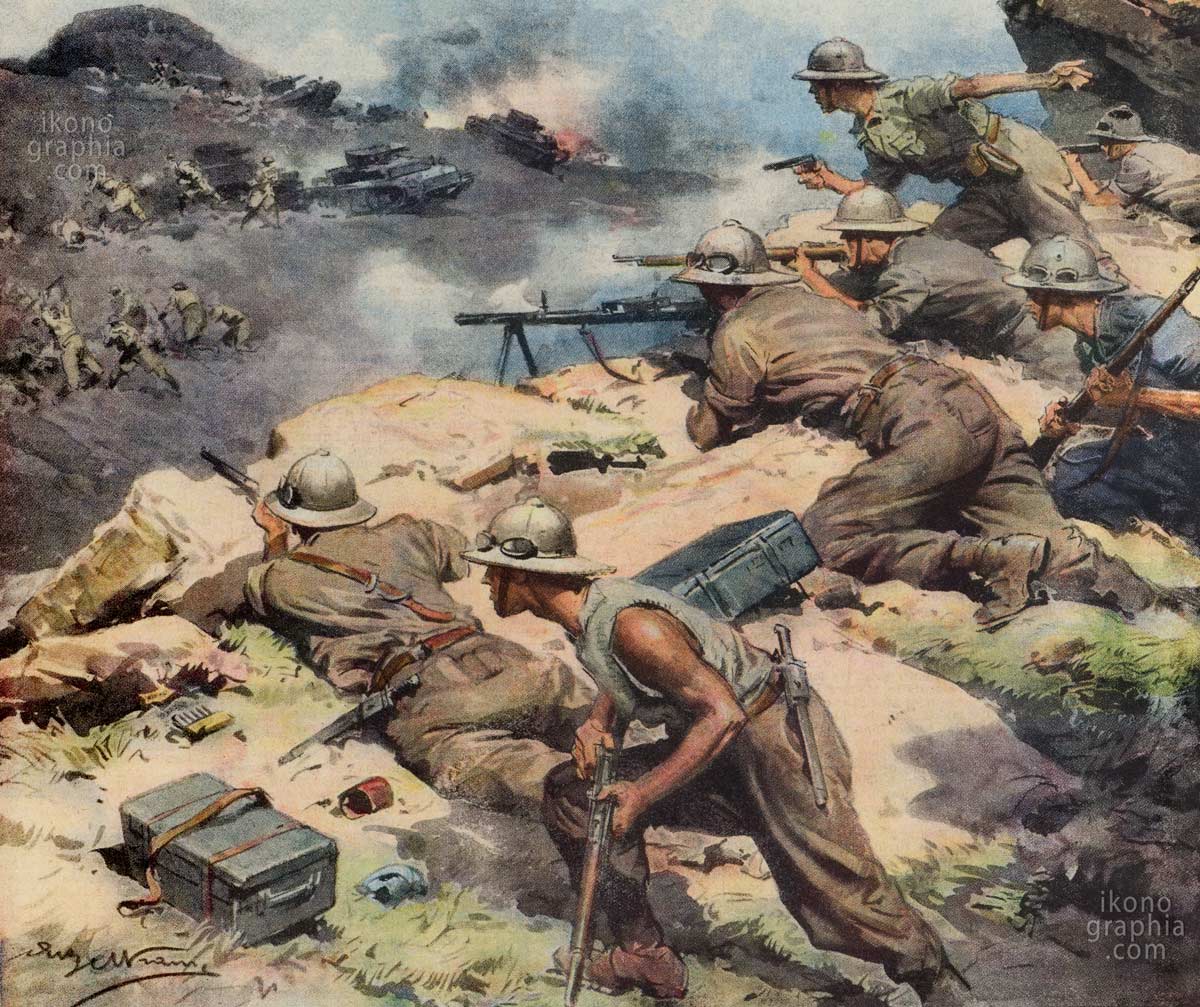 Like all media controlled by strict censorship, the magazine “La Domenica del Corriere” reflected the Fascist Party’s view of the war, like a good vs. bad fight, enhancing Axis victories. In some cases, they were absolutely fake-news; in other cases, they told a sort of “Alternative Truth.”

Achille Beltrame was an Italian painter and illustrator. His color plates for “La Domenica del Corriere,” the most popular Italian periodical, became the magazine’s hallmark. They cover the whole history of Italian customs and society of the first half of the 20th century, masterfully summarizing news, sports, and war.
Beltrame made them alive and current in the eyes of a population not yet completely out of illiteracy. He never moved from Milan, where he designed all his tables. Nevertheless, he managed to represent places, facts, people, and things he had never seen in person, thanks to his innate imagination and curiosity, combined with a rigorous sense of realism. The graphic composition of his works is still a reference.
From 1899 to 1945, he drew for the magazine 4662 front and back covers. Below a selection in chronological order. 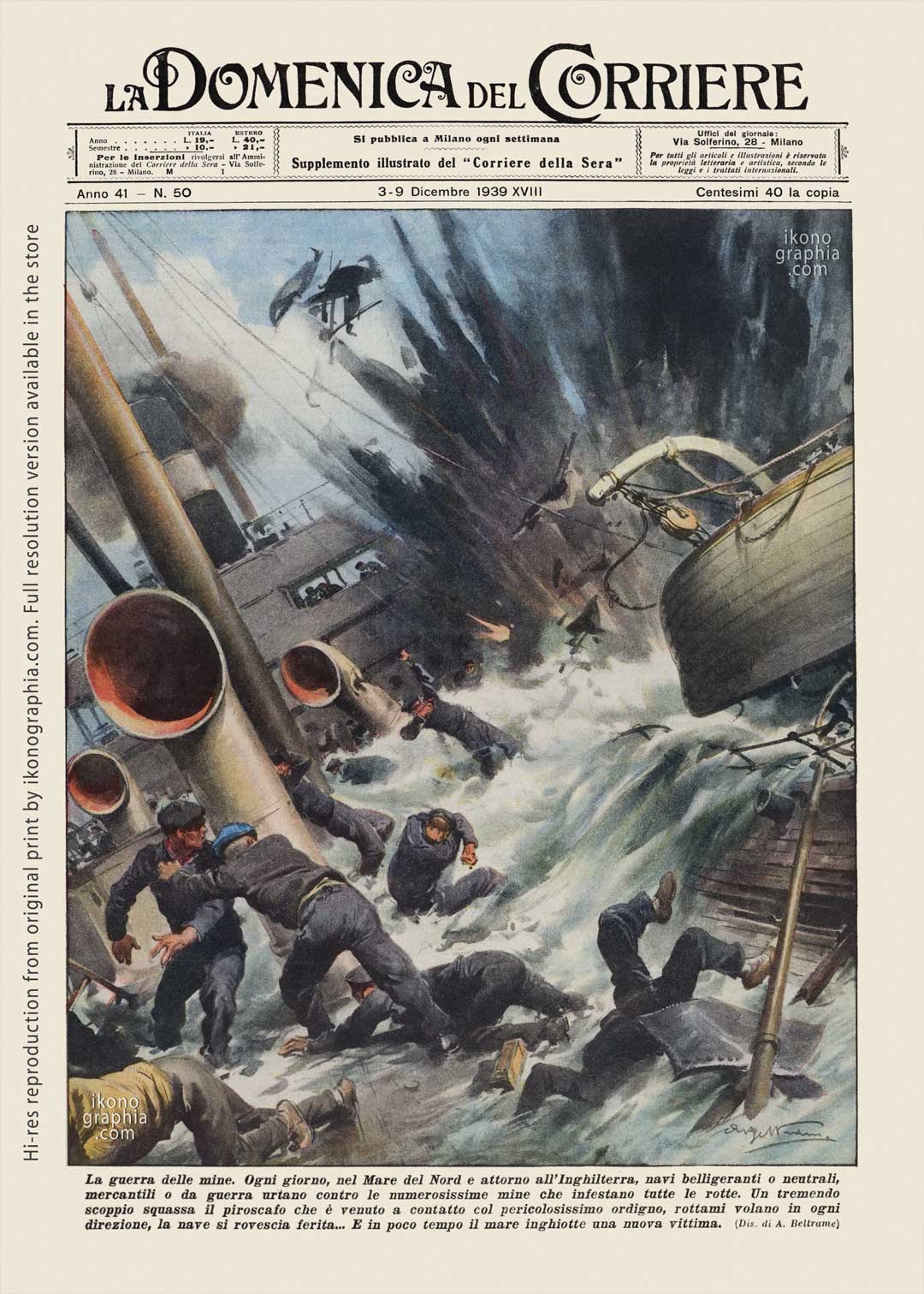 Mines War.
Every day, in the North Sea and around England, belligerent or neutral, merchants or warships collide with the numerous mines that infest all routes. A terrible explosion shakes the steamer that has come into contact with the dangerous device, debris flying in every direction, the ship overturns wounded… And in a short time, the sea swallows a new victim. 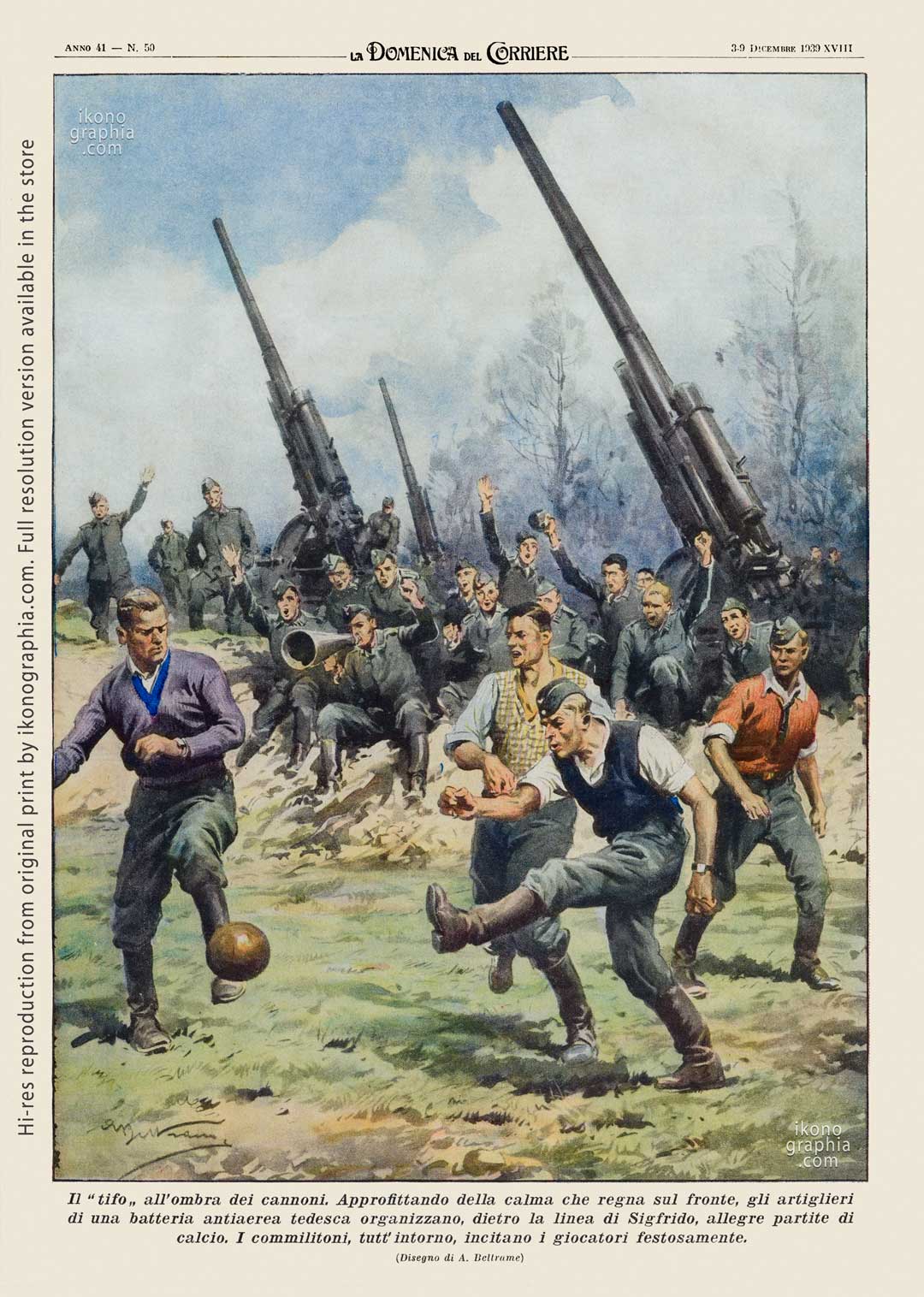 Cheering in the shadow of the guns.
Taking advantage of the calm that reigns on the front, the gunners of a German anti-aircraft battery organize cheerful football matches behind the Siegfried line. The fellow soldiers, all around, cheer the players on joyfully. 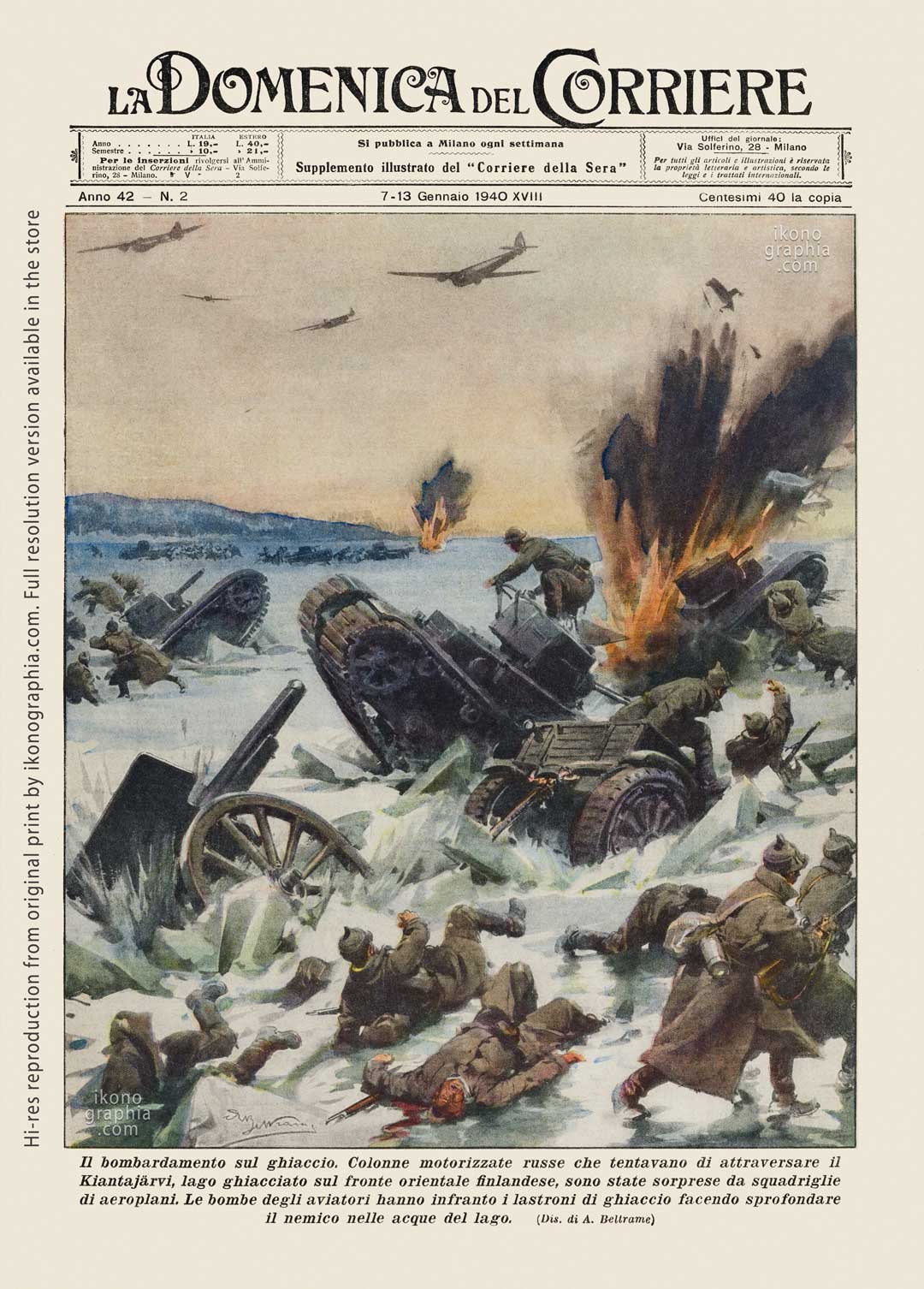 Bombing the Reds on the ice.
Russian motorized columns attempting to cross the Kiantajärvi, a frozen lake on the Finnish eastern front, were surprised by airplanes’ squadrons. The aviators’ bombs broke the ice sheets causing the enemy to sink into the waters of the lake. 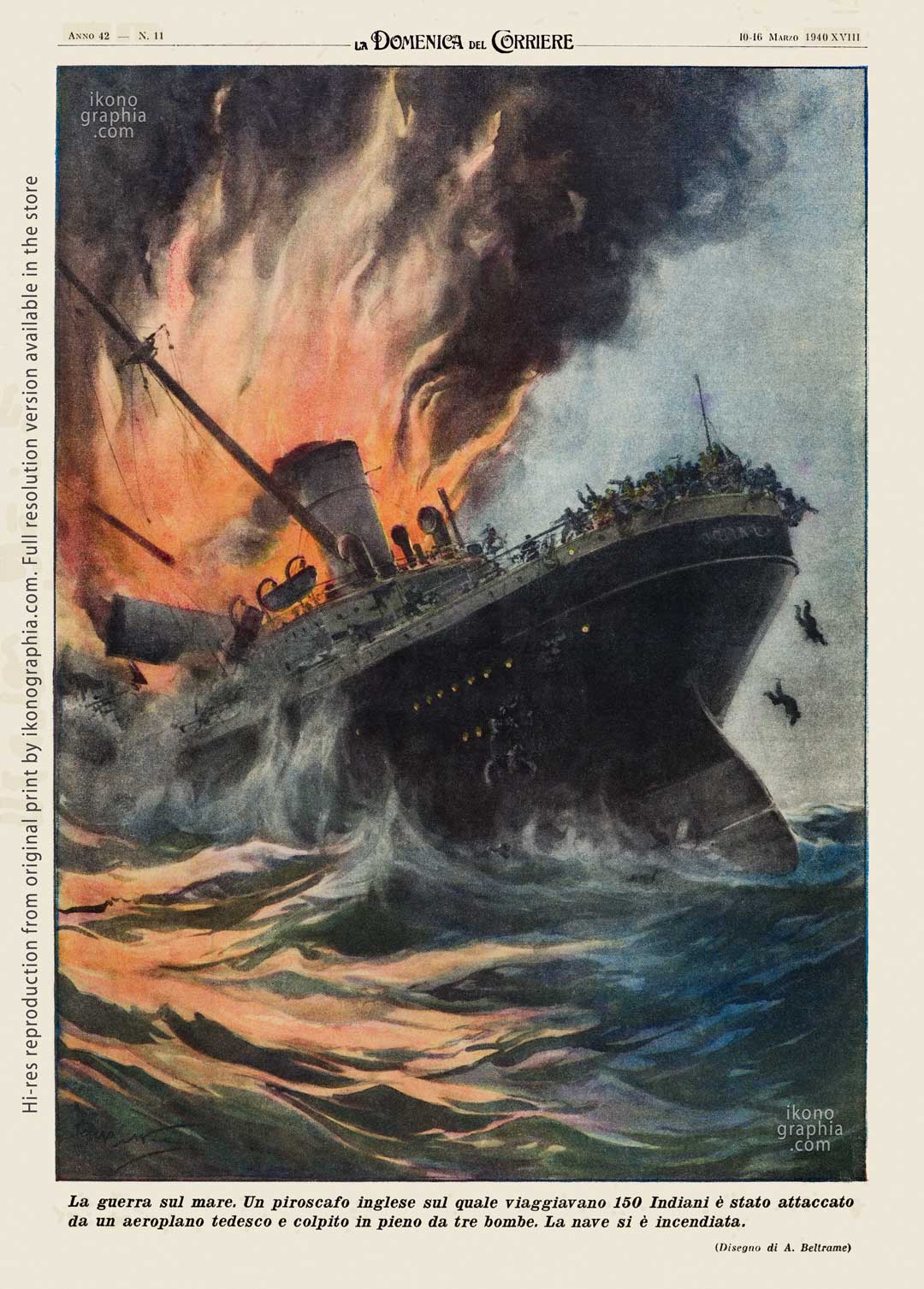 The war on the Indian Sea.
An English steamship with a crew of 150 Indians was attacked by a German aircraft and fatally hit by three bombs. The ship caught fire. 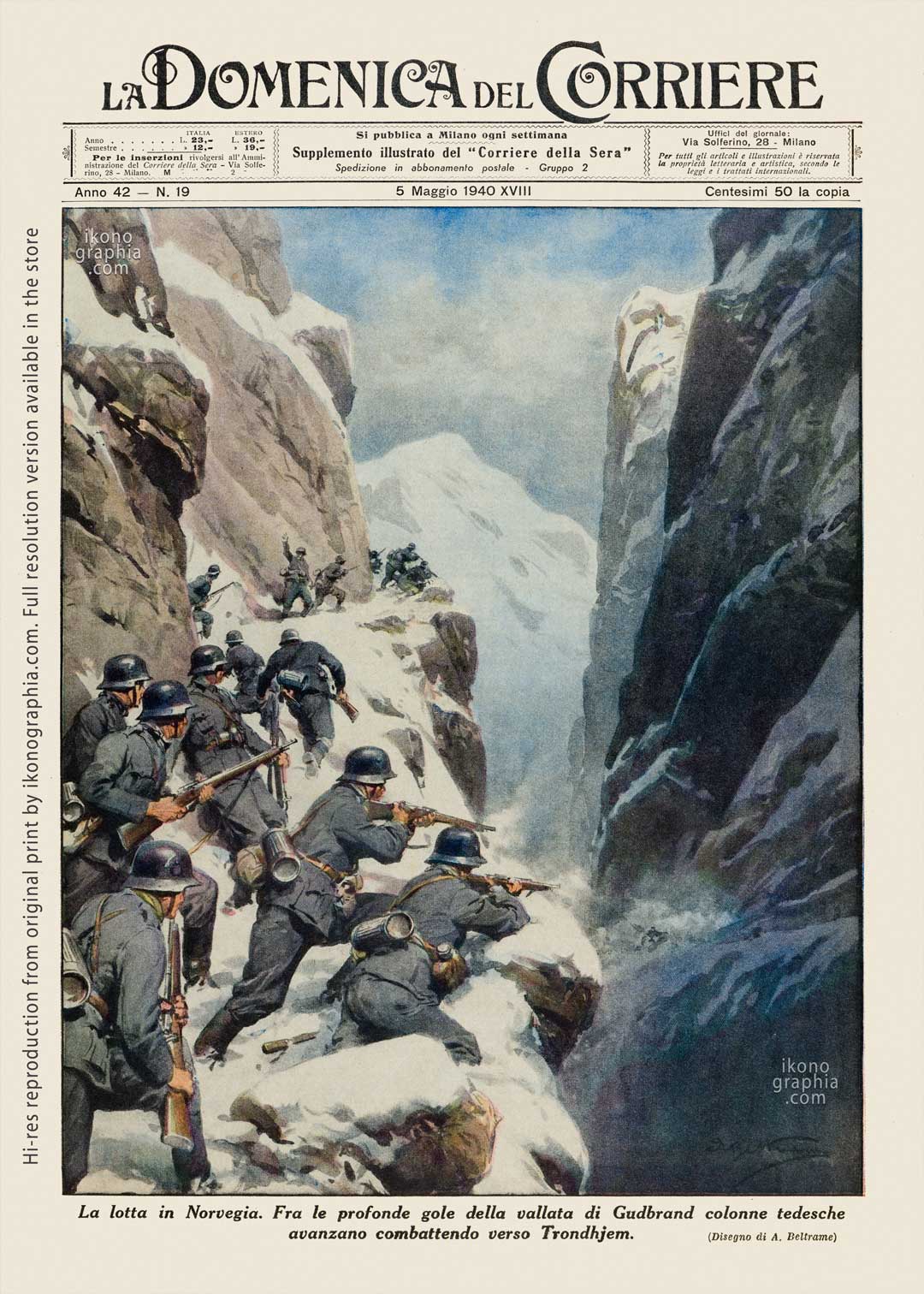 The fight in Norway.
Among the deep gorges of the Gudbrandt valley, German columns are advancing fighting towards Trondhjem. 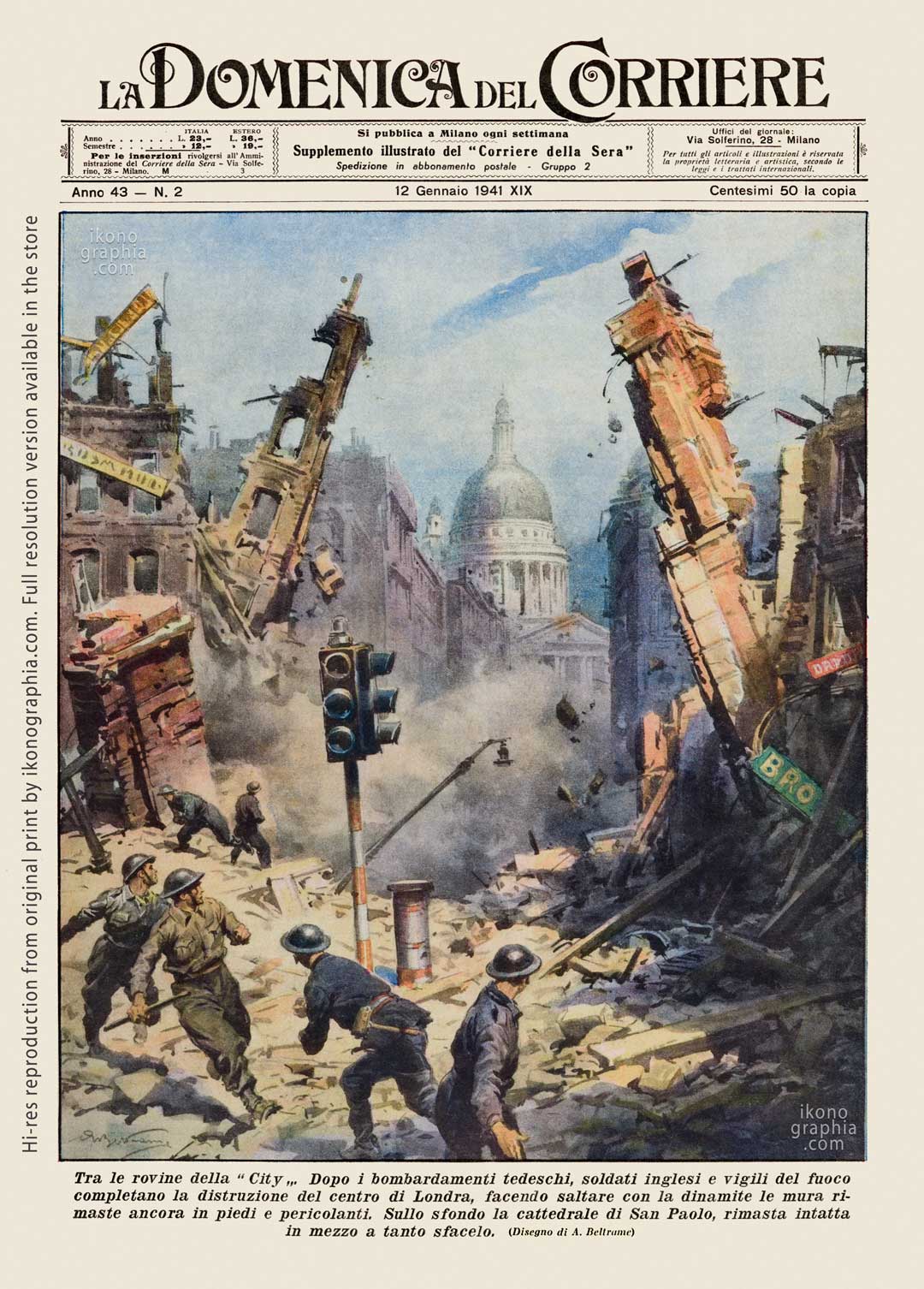 The devastated central London with the surviving St Paul’s Cathedral.
Among the ruins of the “City”. After the German bombing, British soldiers and firefighters complete the destruction of central London, blowing up the walls still standing and crumbling with dynamite. In the background, St. Paul’s  Cathedral, which has remained intact in the midst of so much decay. 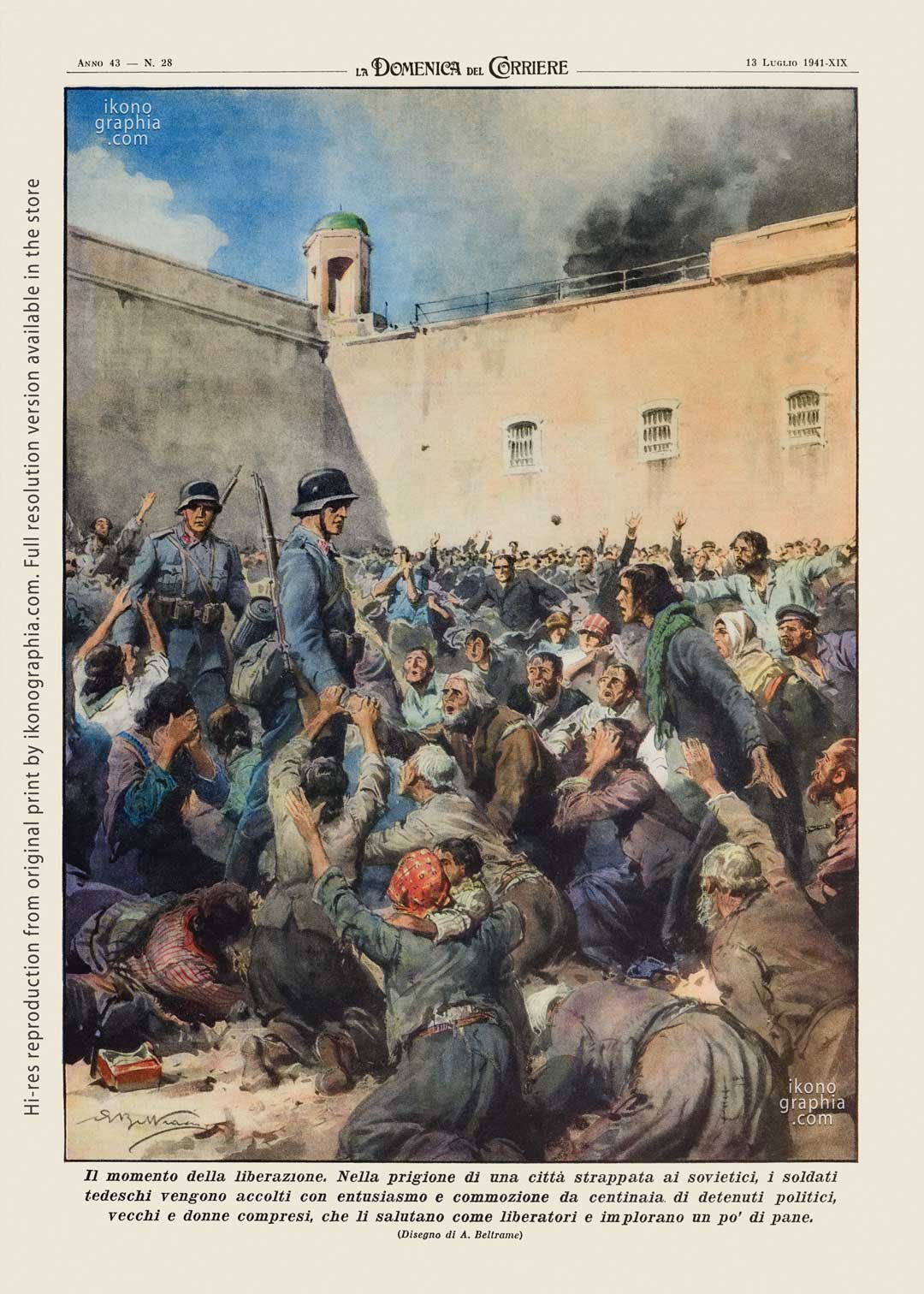 Germans greeted as liberators.
The moment of liberation. In the prison of a city taken to the Soviets, German soldiers are greeted with enthusiasm and emotion by hundreds of political prisoners, including older men and women, who greet them as liberators and beg for bread. 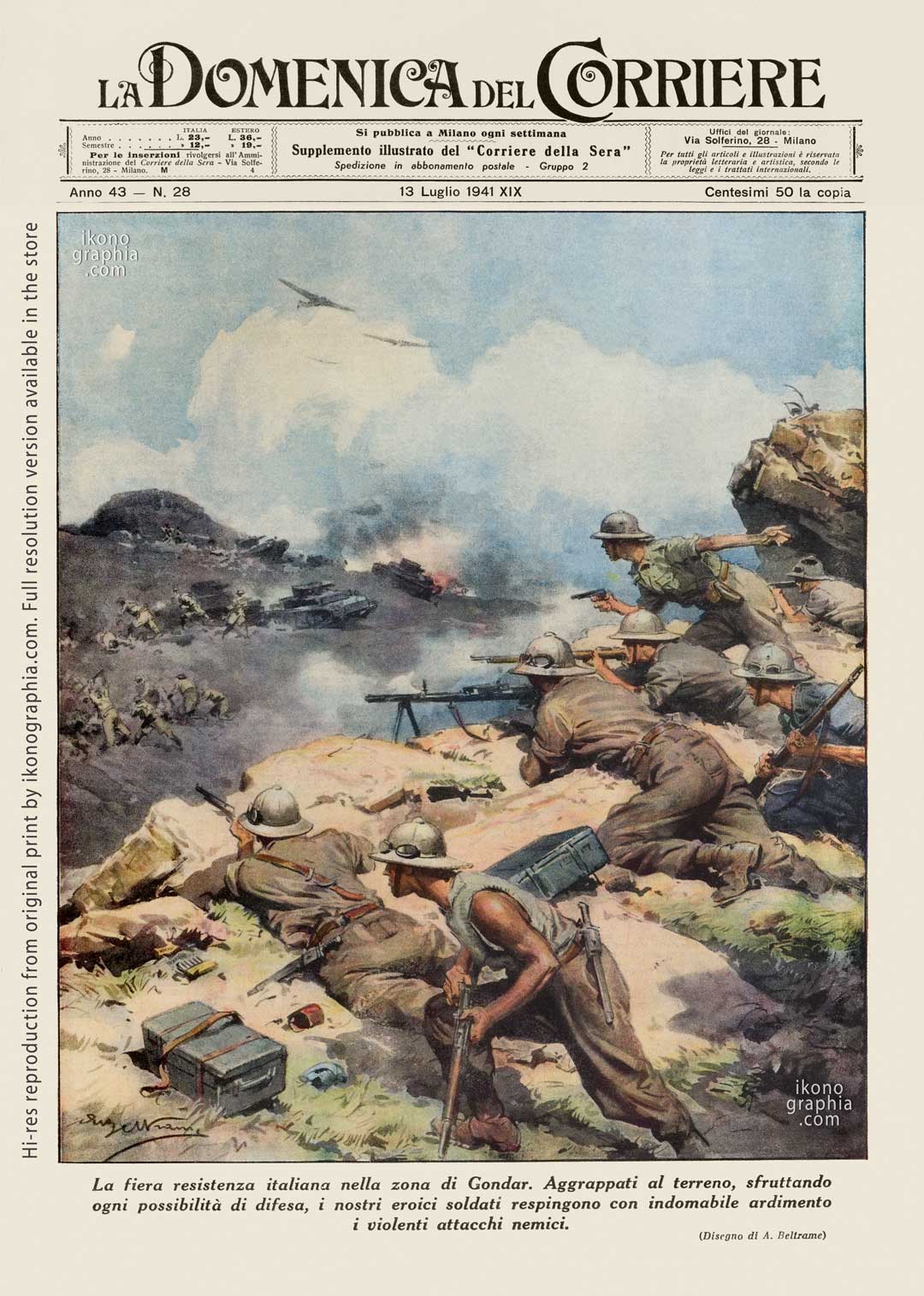 Italian infantry against British troops in North Africa.
The fierce Italian resistance in the Gondar area. Clinging to the ground, taking advantage of every possibility of defense, our heroic soldiers repel violent enemy attacks with indomitable courage.

Italians push-off the British attacks to keep Tobruk.
Alarm in the desert. One of the almost daily British attempts to break the iron circle around Tobruk: while the desert wind rages, enemy tanks and airplanes try to get closer to our positions; but the move is warned, and the batteries open fire on the opponent, forcing him to retreat once again.

The United States in Fascist Propaganda.

According to the Italian press, in the early years of war, the United States was an exhausted country that had not yet recovered from the effects of the Great Depression of 1930s.. Mussolini believed that a possible entry of the United States into the war would have been irrelevant since the American production capacity in the war sector was behind.

Even after the Japanese attack on Pearl Harbor and the subsequent declaration of war, the hypothesis of real US involvement in the conflict in the European and Mediterranean theater was considered unlikely.

The Italian victory in the Mediterranean.
Our torpedo bombers attack battleship “Nelson,” hitting it in the bow with a torpedo and severely damaging two other escort warships. The great air-naval clash, which lasted from 1 to 10 PM on September 27 – had other shining episodes. The Italian torpedo bombers, in various squadrons, hurled themselves with cold courage and superb precision against the English naval formation that had left Gibraltar. Overall battle balance: three sunken cruisers plus one battleship and eight other units hit. Four steamers were then sunk the following day.

Read the original Italian copy in the tabbed content below

Firestorm on the British columns.
Axis aircraft squadrons swoop down on the British motorized columns attacking in Marmarica and heavily bombarding, smashing many wagons, and pinning others to the ground.

The commander at the periscope. The enemy in sight!
Inside one of our submarines immersed, among the thousand complicated devices of the very modern ship, the commander scrutinizes the opponent’s moves, waiting to transmit the orders to the crew.

Axis airplanes devasting Malta.
Malta under the storm of bombs. The armor-piercing shells and two-thousand-kilo bombs, thrown by Axis airplanes on the fortifications of Malta during their relentless offensive, also led to the destruction of the English’s underground deposit base. “Malta” – said an eyewitness – “is a hell of ruins”… 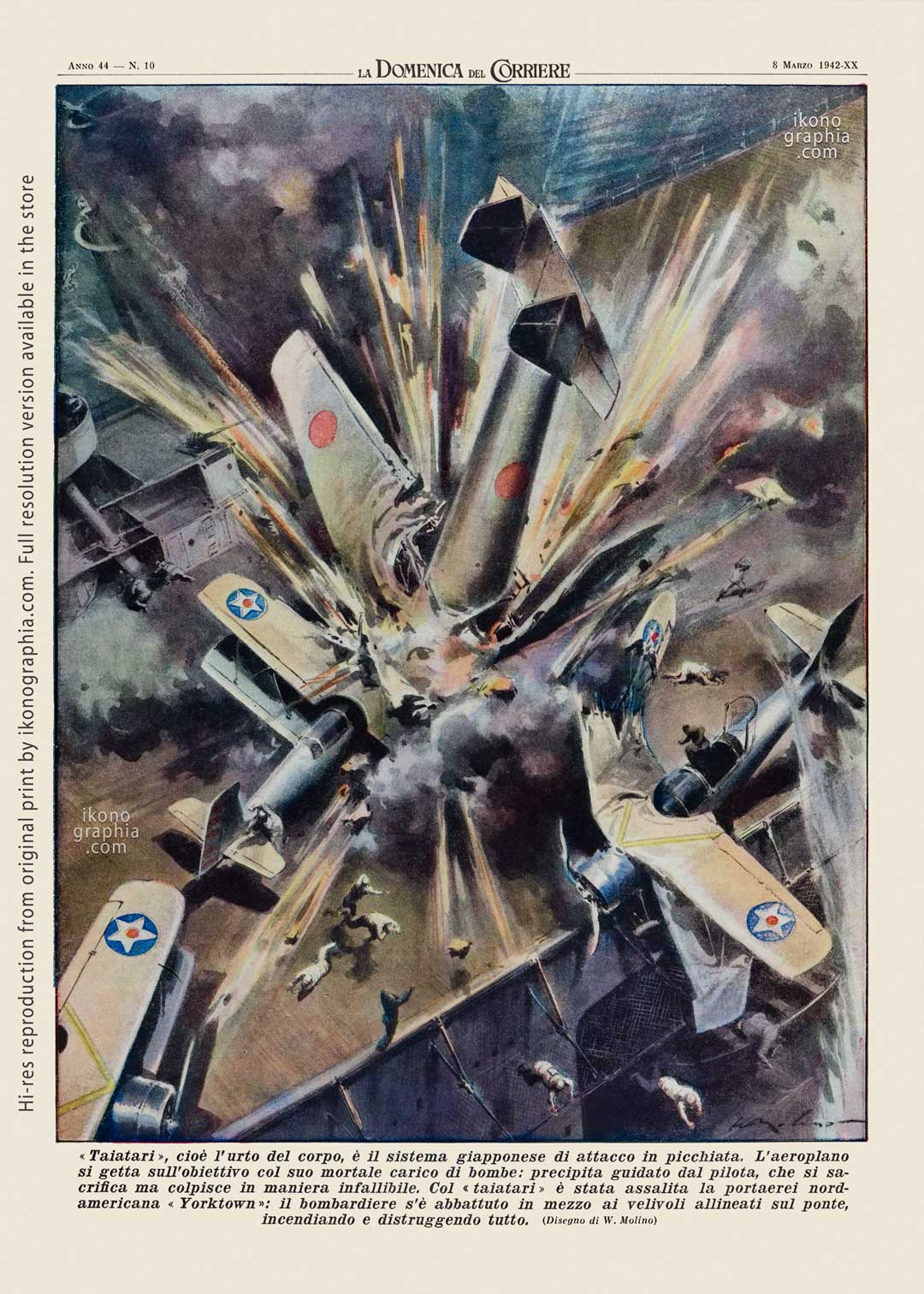 1942, March 8
Artwork by Walter Molino, Beltrame’s most talented pupil. He drew some covers since 1941 and then became the exclusive creator for almost thirty years

Kamikaze
“Taiatari,” which means the body’s impact, is the Japanese system of the suicide attack. The airplane throws itself at the target with its deadly load of bombs, guided by the pilot, who sacrifices himself but hits infallibly. With the “Taiatari,” the North American aircraft carrier “Yorktown” was attacked: the bomber crashed in the middle of the aircraft lined up on the bridge, burning and destroying everything. 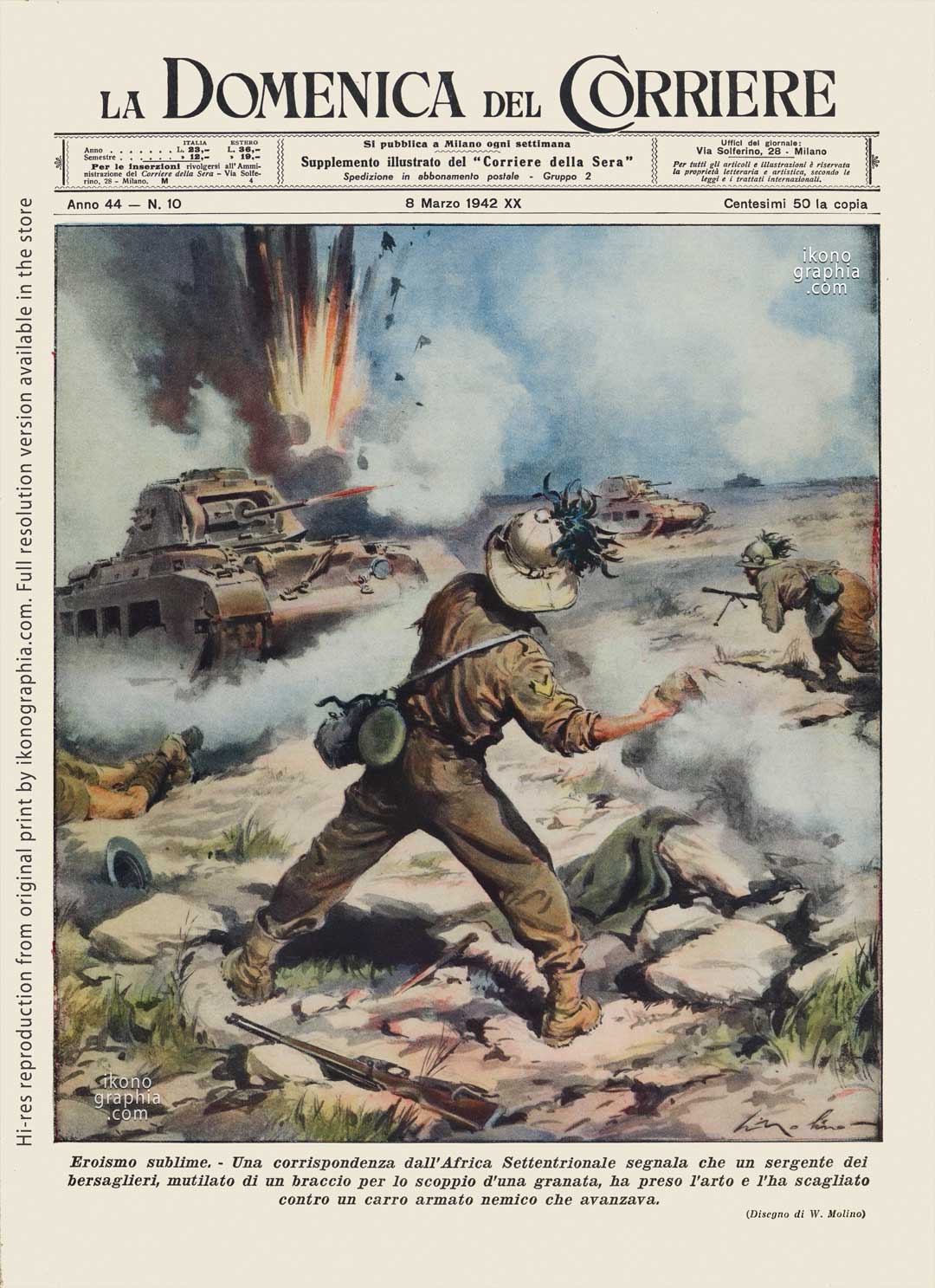 Sublime heroism.
A correspondence from North Africa reports that a sergeant of the Bersaglieri, mutilated in the arm by the explosion of a grenade, took the limb and threw it at an advancing enemy tank.

We use cookies to ensure that we give you the best experience on our website. If you continue to use this site we will assume that you are happy with it.Ok